If you are passionate about fly fishing, then you are familiar with Tarpon. The Silver King. Megalops Atlanticus. Poon. For many fly anglers catching a Tarpon on fly is the pinnacle of fly fishing. Ever year, tens of thousands of anglers migrate to Florida for Tarpon Season. Every Tarpon Season, hundreds of thousands of Tarpon migrate along the coast of Florida. Fly anglers and Fly Fishing Guides, often refer to this phenomenon as Tarpon Season. Becoming increasingly obsessive as the season gets closer. Leading up to the beginning of Tarpon Season, anglers will begin booking their dates with their favorite Tarpon guide, making travel arrangements, checking the integrity of their equipment and stocking up on flies. 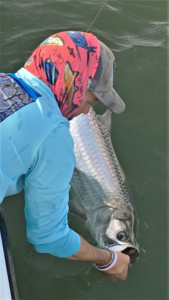 Capt. Jesse with a nice backcounty Tarpon to hand.

It isn’t any different for Guides, prepping to guide an angler to a Tarpon is a massive undertaking. The prep work starts well in advance to the first charter of the season. This prep work shouldn’t be taken lightly. In most cases, an angler has invested thousands of dollars into this particular fishing trip. As a guide, you need to be to match the investment made by your client. Not financially but the effort needs to be matched and exceeded. I take this preparation very seriously. I’ll begin tying flies and rigging leaders months before the season kicks off. It doesn’t stop there, rods and reels are double checked, new gear is ordered. Early season scouting becomes critical. Finding a few spots that are holding early season, “happy” fish boosts your confidence level. Confidence is critical when you are Tarpon fishing.

A Tarpon is a big, predatory fish with years of genetic programming to migrate, feed and reproduce. Its during Tarpon Season that anglers and guides will find the highest concentration of Tarpon in particular locations. During the migration, Tarpon frequent shallow basins, deeper flats, or a cruising oceanside sandbars. Spending time to study this behavior has helped make me a knowledgeable Tarpon Guide. Knowing not only where fish will be but why fish are there is critical. For an angler, feeding a big Tarpon a clump of feathers and fur tied to a hook is life altering and addicting. After you catch your first Tarpon on fly, I can guarantee you will be anxiously awaiting the next time you’re hooked up to The Silver King. 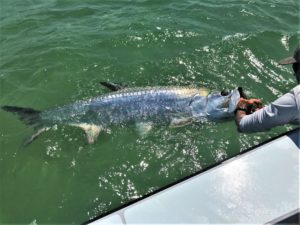 Grabbing a Tarpon after an incredile fight on the Oceanside.

If you’d like more information of fishing Tarpon Season or to book your dates call Capt. Jesse Register of Flyin’ High Charters at 407-448-2017.